Antonia Fraser, Judith Kazantzis and Rachel Billington are three sisters who have made their mark on the literary scene during a combined career of more than 120 years.

The three literary siblings are the daughters of politician, writer and prison reformer Francis Aungier Pakenham, 7th Earl of Longford and his wife Elizabeth.  Lord ‘Frank’ Longford was the author of the 1972 Pornography Report but is probably better remembered for his sustained, and unsuccessful, campaign for the release of Moors Murderer Myra Hindley.

Antonia Fraser, born in 1932, is the author of numerous historical biographies including Mary, Queen of Scots and Cromwell, Our Chief of Men, and has also written the Jemima Shore series of detective novels.

Second sister, born in 1940 is Judith Kazantzis, poet, painter and printmaker who in 2007 was awarded the Society of Authors’ Cholmondeley Award for poetic achievement.

And third sister born in 1942 is Rachel Billington who in a prolific career has written more than 30 novels for both adults and children, journalism for UK and US newspapers and plays for TV and radio.

With a wealth of literary prizes, a CBE, an OBE and a DBE between them these three women come from an illustrious line of feisty females.  Their father, Frank Pakenham was the second son of Brigadier General Thomas Pakenham, 5th Earl of Longford and his wife Lady Mary Julia Child Villiers. There’s that name again!

The Villiers family liked to keep ever close to the throne; from George Villiers, 1st Duke of Buckingham, favourite of King James VI and I, to Queen Anne’s best friend Barbara Villiers and three Royal mistresses – Barbara Villiers, Duchess of Castlemaine, mother to five of Charles II’s illegitimate children; Elizabeth Villiers ‘Squinty eyed Betty’ William III’s squeeze and Frances Villiers, Countess of Jersey and mistress of George IV. The Villiers women (and men) were not a little manipulative; intelligent, entertaining and ever so slightly interfering, once they got their foot in the door there was no stopping them. Through  Restoration romps to Georgian extravaganzas, the Villiers’ were never very far away.

The three Pakenham sisters can trace their ancestry back eleven generations to Sir Edward Villiers and his wife Barbara St John, one of another family of influential sisters pictured on the magnificent St John polyptych in St Mary’s Church, Lydiard Tregoze. 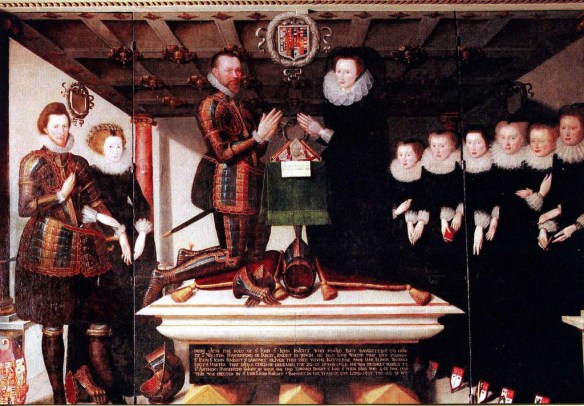 It seems quite fitting, therefore, that Antonia Fraser has done such a lot of Royal record keeping, including a biography on Charles II in which her ancestor features prominently.  Now if only Barbara had stopped her meddling and put pen to paper we could have read a first hand account.